A 5 day tour which takes you to Mexico’s capital and gives you the chance to see preparations for and take part in the annual día de muertos. Special events are held around this time in honor of the festival, including the main zocalo’s transformation into a large ofrenda, special markets appearing in neighbourhoods such as the artsy Coyoacán, and of course, huge parades through the historic centre which have become tradition since the 2016 James Bond film: Spectre. 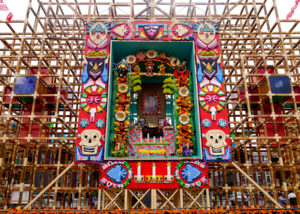 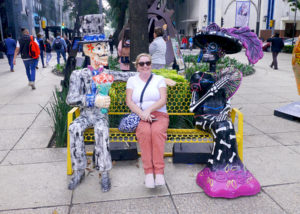 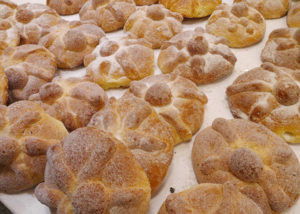 This tour is still to be confirmed depending on how the current pandemic progresses and the status of the parades by the organisers. Please contact us for further information or to register your interest.

Please note our itinerary is subject to change, depending on confirmed parade days.

We’ll take a direct flight from Manzanillo into Mexico City, arriving around lunch time. After grabbing a quick bite to eat and dropping our luggage at the hotel, we’ll show you the historic centre from above on one of the hop on/hop off bus services. It’s a great way to see the centre and get your bearings around where we are staying for the next couple of days.
Accommodation: Mexico City

We first set off early to the Jamaica Market which houses one of the best flower markets in the city and which is especially busy during this period. We’ll stop on the way back in the sweet market at the Merced, a treasure trove of traditional Mexican dulces! In the afternoon, we give you the opportunity to watch the main Day of the Dead Parade as it travels from Chapultepec to the main Zocalo.
Accommodation: Mexico City

Known for its more traditional, small-town celebrations of the festival, we’ll spend the majority of the day in Coyoacán exploring this artsy neighbourhood. Includes opportunity to visit the stunning ofrenda in Frida Kahlo’s house, as well as the artisan and food markets in the centre. In the evening, you’ll have the chance to attend a spectacular Folklórico Ballet performance in the stunning Palacio de Bellas Artes.
Accommodation: Mexico City

Starting slightly earlier than normal, we’ll take a guided walking tour of the Historic Centre, including the Zocalo which is often decked to the nines for Day of the Dead. We’ll then head on to one of the local food markets to try some delicious CDMX dishes, before travelling onto an incredible artisan market in the centre of the city, with handicrafts from all over the country available.
In the evening, we’ll offer you the chance to take a moody boat ride through the Aztec canals of Xochimilco to watch a special performance in the middle of the lake!
Accommodation: Mexico City

$14,500 pesos per person based on double occupancy

*For other departure points, such as Guadalajara, please contact us

Warm during the day, colder at night. Rain is also likely during October/November, so waterproof gear is advised.

Contact us for a full trip itinerary and for further information